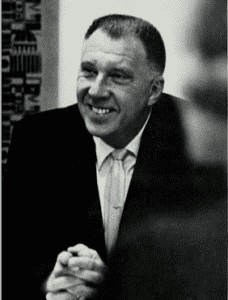 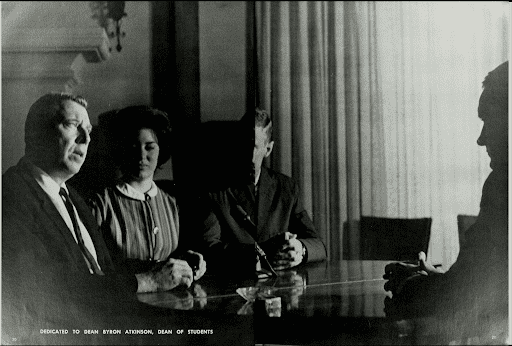 In an effort to document our history at UCLA and the lives of our most impactful alumni, we launched the “Notable Nu” series in our newsletters in 2017. We’ve archived those HERE and this month we will resume the series by adding Brother Byron “Barney” Atkinson (EP 115) to the list.

Atkinson, UCLA’s blunt-spoken dean of students for 19 years, was internationally recognized for his innovative programs to aid veterans, freshmen and disabled students. During his tenure as dean of students from 1961 to 1980, Atkinson gained the respect of students, faculty and parents for his direct, even handed approach to discipline. He helped restore poorly supported traditions such as homecoming and Spring Sing at UCLA, and also waded into more controversial areas during the troubled 1960’s and ’70’s. 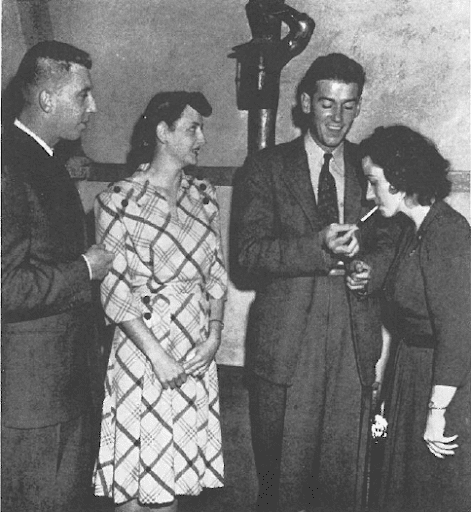 A native of Montreal, Atkinson earned his bachelor’s, master’s and doctorate degrees at UCLA and spent 37 years working for the university. After serving as a ROTC-trained lieutenant in the Army during World War II, he taught English at UCLA and began working with student administration. He became dean of men in the early 1950’s. Atkinson developed programs, which became national models, to aid veterans returning to campus after the war, and later to orient freshmen and to assist disabled students. He served on the California State Board of Education for 17 years, was a trustee of the California State Colleges and helped to develop California’s state college master plan of 1960.

Atkinson, affectionately known as Barney, maintained his soft spot for the snake house during his tenure with UCLA. As Peter Post (EP 506), who held the paid job of IFC Executive Secretary as an undergrad working closely under Atkinson, recalls, “He even got me out of trouble cheating on a test. He said I could tell the professor to piss up a rope.”

Steve Wolf (EP 622) described Barney as “swift, direct and firm with his discipline. A no BS guy who was also supportive of all students. He had a $50 loan system where you could come into his office, get $50 and promise to pay it back within a month. A service I used many times.”

Steve Miller (EP 601), who came to know Atkinson in the 1960’s, shared this story from a time when the admissions process was less scrutinized: “My nephew Garry Seaber (EP 1031) contacted me one day and said that he had been rejected admission to UCLA, even though he appeared to have the grade point and had been Student Body President and an athlete at Palos Verdes High School. I had Garry forward a copy of his application package to brother Atkinson. I then called Barney and set-up a meeting. When I asked about Garry’s chances for admission, Barney’s only question was – ‘Will he be Sigma Nu?’ I replied, ‘Well of course!’ Barney smiled and said, ‘Then he is in!’

Perhaps most notably, during a summer session in the early-1950’s, the Sigma Nu house was discovered to have fallen into particular moral decline. Instead of shutting the fraternity down and forcing a mandatory vacancy, Barney sought to temporarily install an alumnus live-in advisor to regain order among the brotherhood and made former EC Don Riehl (EP 332) an offer he couldn’t refuse to take on the challenge. Don, armed with the power from National to pull any member’s pin who violated the terms of his oversight, begrudgingly moved into Room 1 and steered the chapter back into safe harbor over the course of the next year. No known orgies have taken place in the chapter room in the decades since. 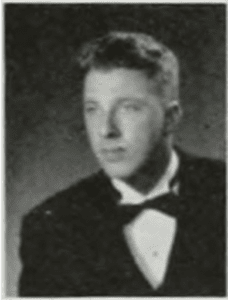 Since joining our chapter in the fall of 1937 through his tenure as dean of students in 1980, Brother Atkinson represented Epsilon Pi with passion.

Obviously, during Brother Barney’s era, administrators had considerably more latitude and, for better or worse, the bureaucracy that resulted from California’s booming population hadn’t taken hold.

PrevPreviousNovember 2021: Cause For Confidence That USC Allegations Are Isolated