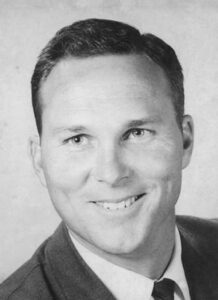 The Bruin basketball team is giving off serious national championship contender vibes and offers an opportunity to recall the impact one of our own, Jerry Norman (EP 373), had in building UCLA’s hoops dynasty. In our latest entry into our online Notable Nu archive here is a refresher on Brother Norman’s impact.

Jerry Norman graduated high school in Los Angeles in 1947 and enrolled at East Los Angeles College, where he dominated the conference and earned a scholarship to the join the Bruins in 1948. In Norman’s sophomore year, UCLA qualified for the NCAA tournament under Coach Wooden for the first time but his rebellious nature caught up with him the next season and he was suspended for ignoring coach and talking to a teammate during practice. However, the infectious enthusiasm and charm that Norman displayed as a member of Sigma Nu earned him his spot back on the team and he was named co-captain for the 1951-52 season. The Bruins won the conference title that season and Norman was a unanimous first-team All-Conference selection.

After concluding his playing career, Norman rejoined his mentor as an assistant coach in 1959. In his first 14 seasons, Coach Wooden’s record far exceeded his predecessors but the Bruins had minimal success in the NCAA tournament. Then, in 1964 everything changed as Brother Norman advodated that the Bruins take advantage of their squad’s quickness by utilizing a devastating full-court zone press that would be a trademark of Bruins basketball. Shocking the college basketball world, 1964 was the first of four undefeated seasons for UCLA. In recruiting, Norman balanced Coach Wooden’s ever-humble style, relentlessly traveling the country to sign the names that built the Bruin dynasty (Alcinder, Allen, Wicks and Valley among others).

Among his most notable accomplishments during his 10 seasons alongside Wooden, he was the architect of the famous “Diamond and One” defense that shut down Elvin Hayes in the 1968 Final Four. Hayes had scored 44 points to beat UCLA in the “Game of the Century” at the Astrodome earlier in the season in what was first regular season college basketball game televised nationally. With Norman’s brilliant defensive strategy, Hayes was held to just 10 points and Lew Alcindor led UCLA to a 101-69 win at the LA Sports Arena.

Inducted into UCLA HOF in 1986, Norman is considered the greatest Assistant Coach in College Basketball history and we are all left to wonder what might have been had J.D. Morgan payed Wooden and his staff a wage commensurate to their value. Instead, Norman replaced his basketball passion for stock brokering in Beverly Hills where he built wealth and a wonderful life alongside his wife, June, their three children and four grandchildren. In 2007, Norman returned to 601 Gayley as the featured guest our Black Knight Reunion.